MORANBAH and how to avoid the next property market disaster

China’s huge appetite for coal peaked in 2011 and the central Queensland mining town of Moranbah was well placed to feed it.

And in in turn it fed crazy property prices and massive rental returns.

..and then it all tanked.

“It happened very quickly, basically within two months it changed.”

“In the peak demand time, a new four bedroom home could have commanded $1 million. That’s come back by as much as 40 per cent in some cases.” 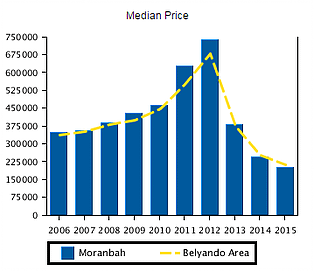 Many investors lost everything. Not just their creditworthiness.

In Jan 2012 the BoomScore was 31 (out of 48) indicating prices had a high statistical probability of growing in Moranbah.

Previous analysis of the BoomScore indicated the price growth potential in an area with a BoomScore of 31 could triple the national average.

…and it proved accurate… yet again.

By Dec 2012, property prices had doubled in Moranbah.

The media were banging on about it and investors were piling in double quick.

Most were too late: the ‘herd’ usually are.

…and it was a rapid drop which occurred ahead of the actual drop in property prices.

A 30% drop in the BoomScore over this period would have been cause for concern but then then it tapered off and remained flat throughout 2012.

But by June 2013 those monitoring the score would have seen it drop steadily down to 10 out of 48 as savvy investors began to offload their properties. So more supply was added to really mess with the the supply demand balance.

If investors had been tracking the data for this market, do you think alarm bells would have been ringing?

But it was too late by then.

Unfortunately, many passive investors missed the signals and subsequently got into financial strive!
The Moranbah Story: a Happy Ending?

A few weeks ago I happen to read Herron Tood Whyte’s  “February  2017 in Review” report.

To my surprise, they stated that prices in Moranbah had recently grown by 20%.

So I checked the BoomScore for Moranbah.

It had breached 20 of 48 before the 20% price increase had begun… and it’s still heading upwards.

Time to buy in Moranbah?

With Boomtown App, you can quickly shortlist hundreds of suburbs that compare much more favourably. So why not focus your attention where it really matters?

I guess every story has a happy ending and maybe the Moranbah Story will too.
TIP! Track the data. It will tell you way before anyone else when problems (and opportunities) are just around the corner.
Boomtown and DSR Score (DSR BoomScore) will soon be merged into “BoomScore” on the first major release of Boomtown in 5 years.
New look…new data…loads new features… always FREE.
Avatars by Sterling Adventures